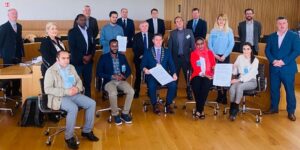 The Ambassadors launched their declaration at a special event in Wexford County Council on Monday, July 13th hosted by the Chairman of Wexford County Council, Councillor Ger Carthy and was organised by Brendan Howlin, T.D. Members of the Oireachtas present at the event also included James Browne T.D.; Paul Kehoe T.D.; Johnny Mythen T.D.; Verona Murphy T.D. & Senator Malcolm Byrne. Also present were the Mayor of Wexford, Councillor Leonard Kelly, Councillor Geogre Lawlor and newly appointed County Secretary, David Minogue. The group had the opportunity to sign the visitors book and to talk in person about their own experiences of living within the Direct Provision system.

Since November 2019 the Sanctuary Ambassadors in  have been meeting regularly, facilitated by Places of Sanctuary Ireland and Wexford Local Development. A number of training sessions have taken place across the county enabling residents of emergency accommodation centres in Courtown and the new accommodation centre in Rosslare Harbour, to come together with other stakeholders, including refugees who have been through direct provision. Their aim is to improve the quality of life for people who are new to Ireland, including all those in the international protection system and to advocate for changes that would benefit both themselves and local communities they now call home.

Part of their learning has included learning about decision making in Ireland, the electoral system, proportional representation, local government and the functioning of Irish state services. They have also done workshops covering advocacy, public speaking, making presentations and addressing issues in a strategic way.

Contributors to the series of workshops have included the former leader of the Labour Party, Brendan Howlin, T.D.; the Director of Communications in Wexford County Council, David Minogue and Pat Montague of Motague Communications who delivered campaign and media training.

Since the outbreak of COVID-19 the Sanctuary Ambassadors have been meeting via Zoom. During this period they have worked on refining a manifesto which had been started around the time of the February 2020 General Election. The group now welcome the commitments of the new Programme for Government to end the current Direct Provision system and have now published the Wexford Sanctuary Ambassadors Declaration based on their lived experience of seeking international protection. 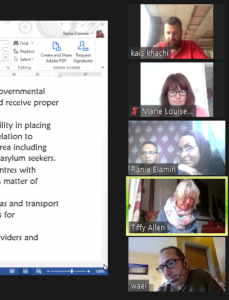 The Ambassadors also believe that there are many other commitments detailed in the Programme for Government and that the appointment of Minister Roderic O’Gorman to the cabinet, with integration explicitly included in his portfolio, will have a positive impact on life for new communities in Ireland.

The Wexford Sanctuary Ambassadors are committed to engaging with communities, decision makers and all stakeholders to help realise the ambitions of the Programme For Government both locally and nationally and look forward to the positive changes ahead. 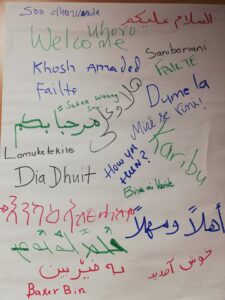